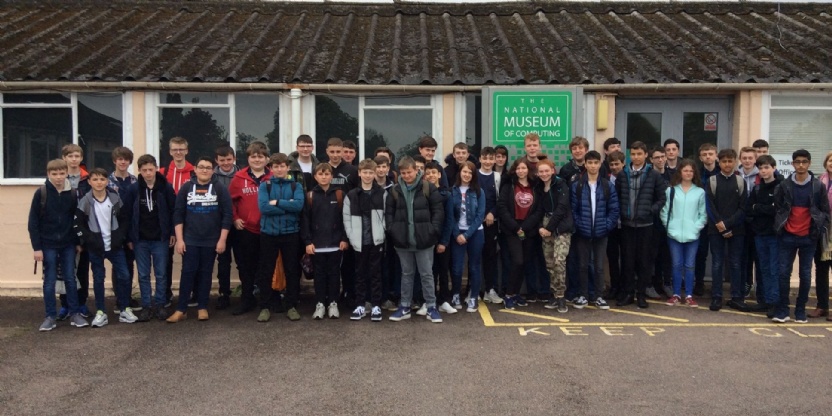 Year 10 and Year 9 pupils who are (or will be) studying Computer Science GCSE visited The National Museum of Computing at Bletchley Park on Thursday 9 May.

The museum traces the history of computing and includes working reconstructions of the Turing-Welchman Bombe that broke the Enigma code and Tommy Flowers' Colossus that broke the Lorenz cipher, used by Hitler to communicate messages with his High Command in World War II.  It charts the development of computing from these ultra-secret pioneering efforts through the large systems and mainframes of the 1950s, 60s and 70s, on to the rise of personal computing in the 1980s and up to the present day.

Head of Computer Science, Adam Depledge, explained, “Pupils have been learning about the history of computers in Computer Science lessons and so the opportunity to see original computers like the “WITCH” (Guinness World Record holder for oldest surviving computer!) was a real treat.”

As well as learning about the invention of the cipher breaking machines and seeing the oldest working computer in the world, pupils learned how a mechanical calculator worked and explored early programming languages. They also toured the museum with all its artefacts to see how, in such a relatively short time since the Second World War, technology has progressed.

The trip also included a trip down memory lane exploring early computer games in the retro gaming room of PC and Console games.

The pupils found the museum fascinating, Joe Glover commented, “It was interesting to see how computers and gaming has evolved over time.”  Tom Knight added, “I really enjoyed the trip and am looking forward to Computer Science lessons next year.”  Joshua Apaya said, “It was an amazing trip, I saw a lot of things that I am sure that I won’t forget any time soon.  We were introduced to the Turing Test, which blew my mind to say the least. Finally we coded and created our own games which was one of my favourite parts!”  Alex Allison, added, “I learnt about the programming language used by the early machines and how different it is compared to our current languages like Python and C++.”

Mr Depledge continued, “It was clear the Museum really brought the topic alive for the pupils and the opportunity to play some classic games was a real highlight for everyone too!”