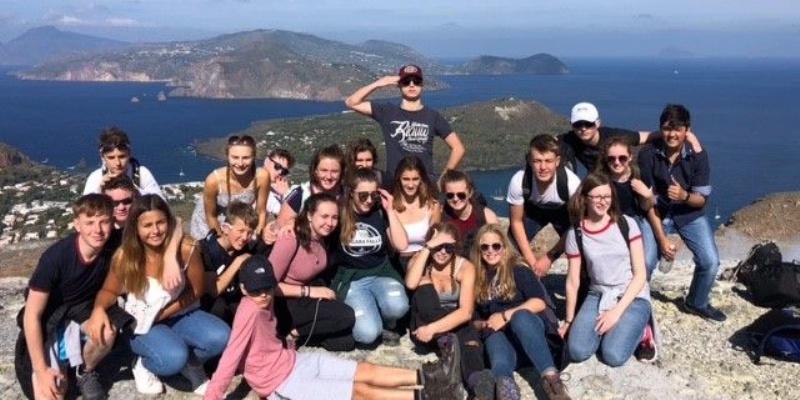 During the Michaelmas half term holiday 22 Year 10 Geography pupils travelled to the Italian island of Sicily. The largest island in the Mediterranean, Sicily is known for its diverse geography, flora and fauna, so the trip offered pupils an unforgettable opportunity to experience geography first-hand, supporting their GCSE studies and bringing the subject spectacularly to life.

Over the four day trip pupils visited some of Sicily’s most stunning geographic features including Mount Etna, the Alcantara Gorge and the small volcanic island of Vulcano.

Leaving early on the morning of Monday 22 October, the group travelled to Luton Airport to board the plane for Sicily, by lunchtime they had well and truly left the cold of England behind and were on the coach heading for their first stop at Taormina on the hill of Monte Tauro and the chance to take in breathtaking views of the Mediterranean sea across the sweeping bays to the south of Mount Etna. From there it was straight to Pizzeria Al Varo to get hands on with the culture of the island, making traditional Sicilian thick crust pizzas.

Georgie Clarke and Abbie O’Carroll-Bailey, explained, “The pizza was amazing, making it ourselves and having it cooked in a classic pizza oven definitely improved the taste. Then afterwards we enjoyed wandering round the town. The views over the sea were stunning and many pictures were taken. On the way back to the hotel the weather really became exciting, thunder clapped and lightning lit up the sky over the sea, creating a very exciting atmosphere.”

Day two started with an early morning swim and then the group headed off for Mount Etna. Before ascending, they visited a lava field left after the 1992 eruption, which put into perspective the explosive power of the volcano. Georgie and Abbie continued, “We were warned that it would be a cold and an extreme landscape at the top, we didn’t believe it until ice started forming on our hoods and in our hair. The poor weather stopped us reaching the very top, but we still had an amazing experience looking at the smaller craters as the freezing fog swirled around us.” Mount Etna was followed by a trip to the Alcantara Gorge, where the group explored the spectacular rock formations sculpted by lava mixing with water.

The next day Princethorpe’s geographers visited Vulcano, a small volcanic island north of Sicily. There they climbed to the top of Fossa di Vulcano. Georgie and Abbie, said, “The smell of sulphur filled our nostrils, but after a while we got used to it and slowly ascended. The view was fabulous and the blue skies definitely improved the experience. It was a shock to all of us how enormous the crater was and how hot the stones around the sulphur fumaroles were. After a long hot day we enjoyed cooling down in the sea and in the mud pools. They smelled awful, but were apparently good for our skin. It was a great way to end the trip.”

Day four saw the group enjoy one final sunrise before heading off to Catania Airport and the trip home.

Georgie and Abbie, finished, “A huge thank you to everyone involved with the trip especially the teachers that put up with 22 of us for four days. It was an amazing experience full of extreme environments and unforgettable landscapes.”

Our thanks also go to the four staff who organised and accompanied the pupils: Anne Allen, Helen Baker, Stewart Dear and Mike Taylor.